So that’s why you always get a cold on holiday! Think summer breaks recharge your batteries? Think again 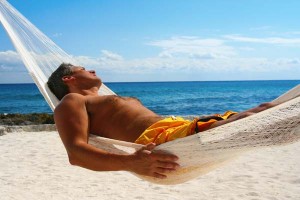 Ticking off the weeks until your summer holiday?

You may anticipate a relaxing time away, but your body can react to the change in routine in negative as well as positive ways.

Air travel can trigger pain in a tooth that hasn’t previously bothered you, says Luke Cascarini, a consultant oral surgeon at BMI The Sloane Hospital.

‘Changes in altitude can cause tiny pockets of air to become trapped in deep fillings or collect in areas of decay. This air is trapped at a different pressure to cabin pressure, which is why it causes pain,’ he explains.

The same could happen if you were mountain climbing or skiing.

‘Unfortunately, you won’t know about potential problem areas until you fly. Have a check-up before you go away to check you don’t need any fillings. The pain should dissipate within a few hours of landing – but see an emergency dentist if it persists.’

YOUR stomach is vulnerable from the moment you start your journey. Long-haul flights can slow down the speed at which food moves through the gut, and this change, together with possible dehydration on the plane, can lead to constipation, says Dr Charles Murray, consultant gastroenterologist at The Royal Free Hospital.

EVEN if you haven’t taken sick leave in months, you may find yourself succumbing to a cold or infection as soon as you arrive on holiday.

Dutch researchers found that around one person in 30 becomes ill – with a variety of different complaints – as soon as they stop working and try to relax; a phenomenon sometimes called leisure sickness.

One theory is that while we are at work our body is constantly producing stress hormones such as adrenaline, which may help to ward off infection while we battle with the demands of our busy lives – this is our fight-or-flight response to stressful situations.

But the minute we start to relax, we catch any bugs that are around.

Dr Matthew Buckland, a consultant immunologist at Barts Health in London, explains: ‘Travel itself can be quite stressful. But once you’re on holiday there is a kind of overhang and the body finally gives into this build-up of stress, lowering immunity and making you more susceptible to any bugs or infections.’

And being in close proximity to people in a plane cabin won’t help. Colds are more than 100 times more likely to be transmitted on a plane than during normal daily life on the ground, according to the  Journal of Environmental  Health Research

HAY FEVER MAY  GET WORSE

‘The rule of thumb is that if you travel south to the Mediterranean  the grass pollen season finishes earlier, so it’s pretty much over now – which is why you may find your hay fever improving,’ explains Dr Jean Emberlin, scientific adviser to Allergy UK.

‘But if you are heading north to Scandinavia, for instance, the grass pollen season may still be going on until July. The same is true of the U.S. ‘Take the same precautions you would at home, such as using nasal sprays and wearing sunglasses, as you never know when you might be exposed to pollen.’

This is thought to be the result of blood vessels expanding as the body tries to cool down in heat. The charity suggests that if the temperature rises much above 25c  (77f) you should  monitor your glucose levels  more regularly.

…AND GIVES YOU A MIGRAINE

YOU may think that holidays help to combat headaches, but they can actually be a trigger for migraine.

One theory is that the high pressure conditions during hot weather disturb the hypothalamus, the area in the brain that acts as our body’s natural thermostat, explains Dr Andy Dowson, Director of Headache Services at King’s College Hospital, London.

You could also end up with a migraine as a result of travel sickness. Prevention is key so, if you can, sit in the most stable area of a plane, which is by the wing – or in the middle of a boat, or in the front seat of a car.

WHY YOU FEEL SLEEPY

The reason you find yourself giving in to an afternoon doze on holiday is because most of us are sleep-deprived, explains Professor Russell Foster, director of the Sleep and Circadian Neuroscience Institute at Oxford University.

‘We’re running on empty. Once we’re on holiday we relax and begin to catch up. This is exacerbated by heat, heavy lunches, alcohol – all of which drive us into the “siesta” state, as does the fact that we go to bed later because we have delayed the onset of sleep by having a nap in the afternoon. So our entire sleep cycle changes.’

If you are holidaying by the sea, you may find yourself sleeping even better. Sea air is filled with negative hydrogen ions – particles that improve our ability to absorb oxygen and boost levels of the ‘feel-good’ hormone serotonin. This may make us more relaxed, so we sleep better.

NUMEROUS studies have shown that no matter how much you have enjoyed your holiday, the lasting effects can fade away in less than a week.

One holidaymaker in three says that the very thought of returning to work makes them feel depressed. It can seem as though it’s almost pointless going away.

‘If you can, give yourself a day to recover from the holiday, perhaps by not beginning to answer emails straight away,’ suggests Dr Sandi Mann, lecturer in occupational psychology at the University of Central Lancashire.

‘That will take away a self-imposed pressure. But unpack immediately instead. There’s nothing worse than a half- unpacked suitcase in a corner of the room to remind you that your holiday is over.’

PS: BUT IT’S NOT ALL BAD NEWS

Basking in the holiday sun may lower your blood pressure, suggest researchers from Southampton and Edinburgh Universities. In their study, 24 healthy young men sat under a sun lamp for 20 minutes and had their blood pressure measured.

Diastolic pressure – the lower of the two figures in a blood pressure reading, when the heart relaxes – dropped significantly and remained low for at least half an hour after the lamp was switched off.
It’s thought that the UV rays triggered the release a compound called nitric oxide from the skin, which relaxes blood vessels, causing blood pressure to fall.

If you suffer with skin complaints such as psoriasis – in which scaly pink patches form on the elbows, knees and scalp – you may find that the condition improves when you’re on holiday.

‘Short bursts of ultra-violet radiation (UV light) reduce inflammation on the skin, which is why it’s a common treatment for psoriasis and eczema,’ explains Dr Sajjad Rajpar, consultant dermatologist at Queen Elizabeth Hospital, Birmingham and the BMI Priory Hospital. ‘However, you need only five minutes of sunlight exposure – without sun cream – to have an effect.’

The salt in seawater also has antiseptic properties and may reduce an infection associated with eczema – though it’s important to rinse skin after swimming, then moisturise and apply sun cream.

A 2008 study published in the journal Skin Research found that eczema and dermatitis – inflammation and irritation of the skin -improved after sufferers bathed in seawater.

The theory is that salt and potassium chloride in the water ‘formed a barrier over the damaged skin and speeded its healing’.